mortenbrekke Posted on August 4, 2013 Posted in Uncategorized No Comments

This summer I have had the chance to record some interesting “serious” music. For the past year or so Ive been working as a live-sound engineer for the music-academy in Oslo (nmh), and lately the students and teachers have also been asking for my recording-services. After recording one of her students exam-concerts, the classical pianist Kristin Fossheim decided to book some recording-sessions in more controlled environments.

The studio-recording sessions were quite different from the concert-recording: without audience, we had the chance to divide the music into smaller parts and make several takes until it was perfect. Later, in the studio, one must choose the best takes and compile them together. An edited 17 minutes sonata looks something like this: 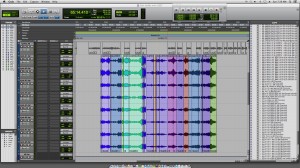 Luckily for me, Kristin did a great job both as a musician and a producer. After some intense days in the studio, where I got the chance to use my Pro-Tools chops, we had produced 3 sonatas by Henry Vieuxtemps, Arnljot Kjeldaas and Zoltan Kodaly.

The sonata by Kjeldaas, “Sonate for bratsj og klaver”, is historically interesting: written during the second world war, its an attempt to describe the German invasion of Norway with music. There are not many avaliable recordings of this sonata, and perphaps the recording we did can become important musical documentation? I enjoy listening to the music, and I feel that the this sonata and the composer Arnljot Kjeldaas deserves higher recognition.

As a part of her P.h.d. project at NMH, cellist Tanja Orning is producing videos with her playing contemporary music by composers such as Simon-Stene Andersen and Morton Feldman. 4 days of recording will be edited later this autumn.

Jazzdrummer and composer Dag Magnus Narvesen gathered his octet and recorded some new tunes right before he packed his things and moved to Berlin. The recording was done in a rehearsal-room that we usually would consider too small for a live-recording of such a large band: only 35 square meters and low ceiling. In the mix, however, we decided to use the “small-room sound” to our advantage: by turning up the room-microphones, (mkh8020) the recording became more alive and realistic. You could really feel that the band was in the same room playing together.. In the end we decided not to add any artificial reverb, and use very little Eq and compression. I feel we managed to make a natural, somewhat unpolished sound, that fits the music. Small rooms can have a certain flair that is difficult to re-create with artificial reverb.

The music can be described as modern, energetic jazz in the heritage of Charles Mingus, Ornette Coleman, and fellow Stavanger-townsman Per Zanussi. Dag Magnus is a talented composer and band-leader, and the young band is playing great. I really hope that he manages to keep the band together after he moves to Berlin..

The tunes from the recording-session will soon be avaliable online.