Will my new boxes really improve the sound?

mortenbrekke Posted on April 14, 2014 Posted in Uncategorized No Comments

Working with live-sound, I mostly work in places that have all the equipment that is required, so there is no need for me to bring my own gear. But in the past I have felt the urge to pimp up these sound-systems with my own boxes, partly because Ive felt that something has been lacking in the sound, and I wanted to bring some gear that I always would be familiar with and perphaps give me a “signature” of my own. I decided to limit myself to a high-quality external vocal-channel strip, because here I felt there was most room for improvement compared to the channel-strips that are already included in the usual live-sound mixers. After some research I went for these boxes:

To justify the cost and the hassle it is to carry and connect these boxes, they really should make a difference to the sound. Lets find out if they do!

The vocal-sound that you hear in your favourite records are clear and crisp without sounding harsh and sibilant. It should be in front of the mix without hurting your ears. The easiest thing to try is perhaps to increase all the high frequencies to make it stand out.. But this simple approach will drag up a lot of dirt, ugly, nasal sounds that you dont want.. some engineers will therefefore add a multiband-compressor that will make sure that no frequencies stand out, they will particularily pay attention to the high-mid area around 3 kHz where the ears are most sensitive, and 7 khz where most of the sibilants are. Ive seen live-sound engineers use the Waves-plugin C6 with great success, producing clear, smooth vocals.  But used too hard multiband-compressors can produce an over-washed, boring sound without any edge, so I decided to go for more a more classic apporach.

The main asset of the UTA EQ is that you can combine shelf and parametric filters to create some unique filter types. Playing around with the EQ, I soon found a high-shelf that was much more aggressive than what you usually find on mixers. With a boost of 2DB at 4.3khz, the actual EQ-curve looks like this (with HP filter engaged): With just one knob I make a combination of dip at 3 khz, peak at 5-6 khz, and high-shelf filter. With small adjustments this filter would work on a lot of sources, first you place the shelf so that it peaks at the ugly resonance in the high-mid, basically you try to make the vocal as nasal and screaming as possible.. then you move the filter an half octave or so over this area, and voila, the sound can really open up. (Blend to taste, dont overdo it as the sound can become thin. Sometimes a couple of DB is enough) Another cool thing about this EQ is that you can combine this with a “resonant low-pass filter” to boost the very highest frequencies (higher than the sibilants) to create that modern in-your-face pop-vocal sound: 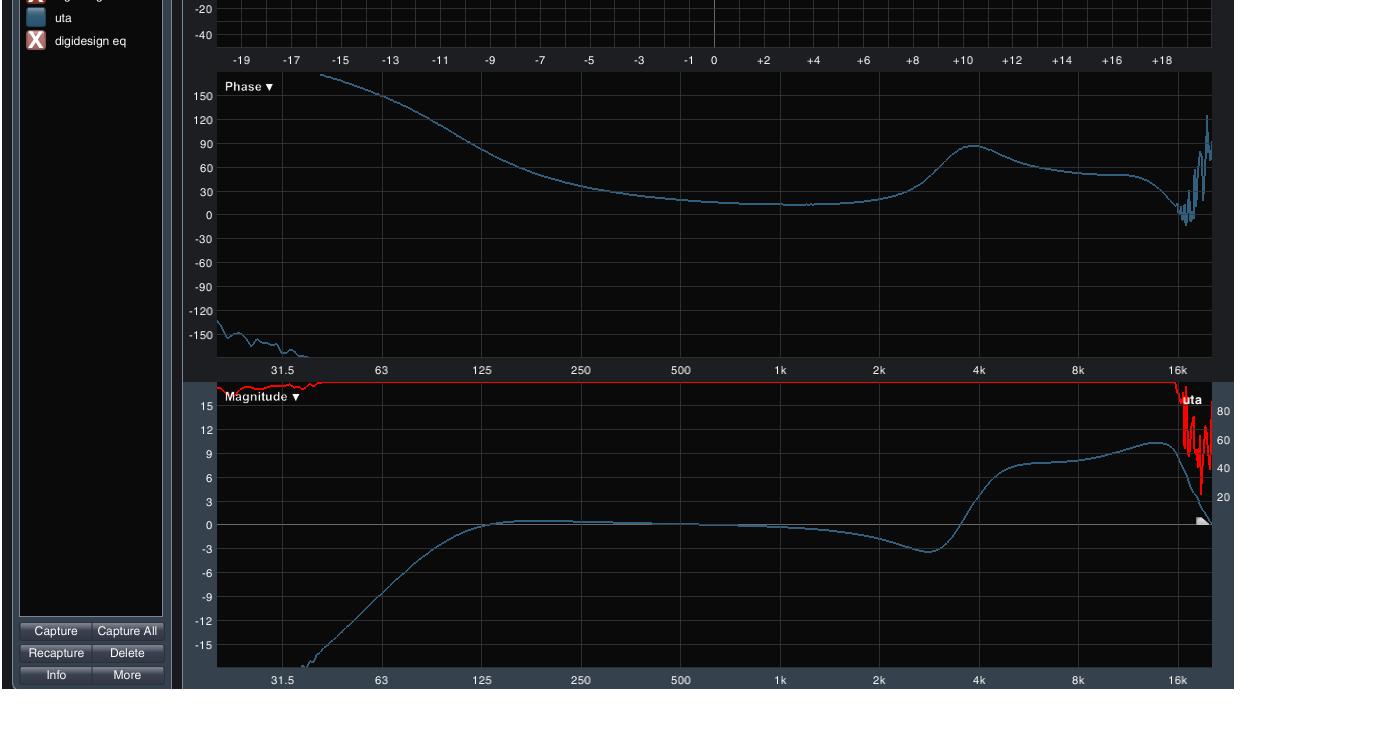 Ive brought this box to a couple of concerts and feel that Ive found a workflow that quickly gives me a nice EQ-ed vocal sound.. but still the question remains, could I get the same results just by tweaking the standard EQ at the mixing desk? To answer this I tried to emulate the UTA-eq using the standard Avid EQ3 that comes with Pro Tools. This eq should be quite similar to the ones found in digital mixers. And it is one of few standard EQs I know where you can make “resonant shelf-filters” which resembles the one I made with the UTA. After some tweaking the curves matched pretty well: 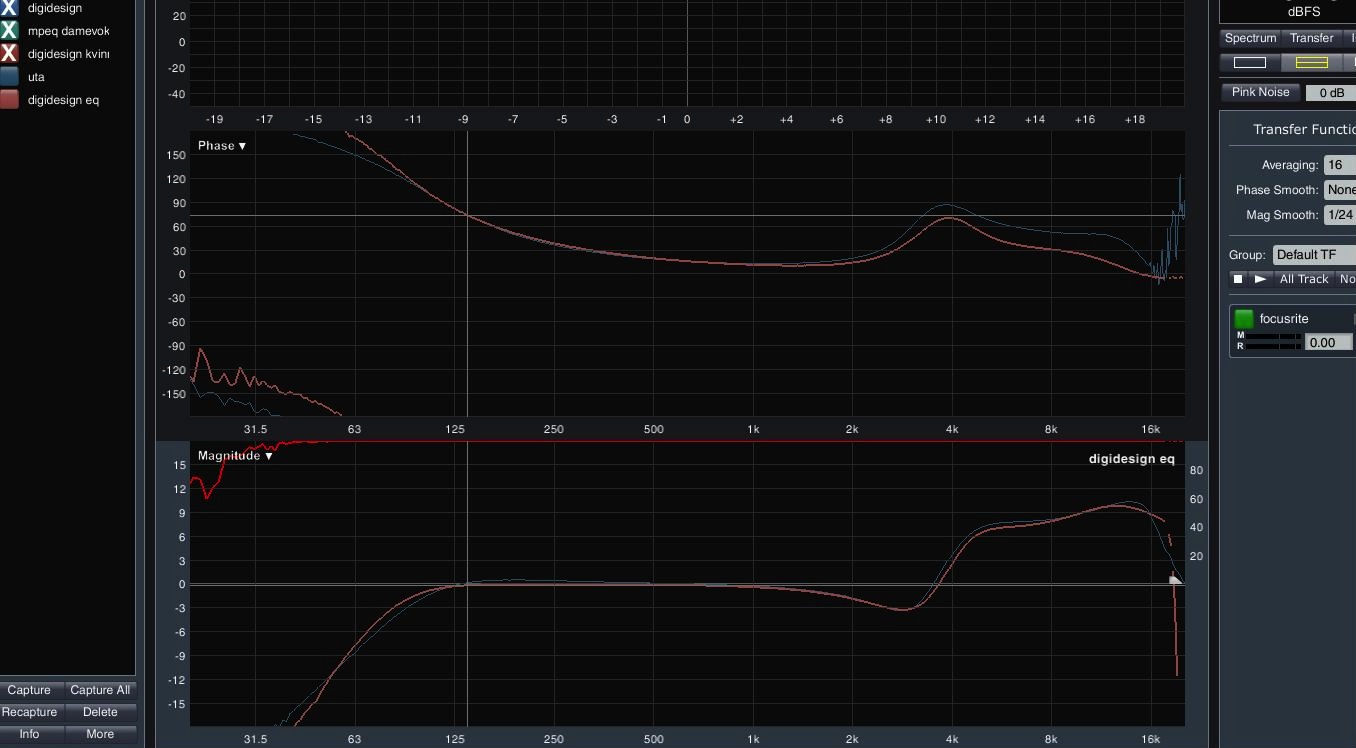 perphaps some of you would like to see what I did to the Avid EQ as well: 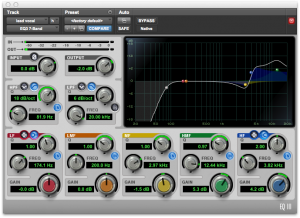 This settings look dramatic compared to the “2 DB” shelf on the UTA-eq. The high-end is pretty hyped! Note also that I needed an extra band of EQ to create the dip at 3 kHz

Lets see how it really sounds, and if there are any differences between the expensive analog EQ and the cheap digital-EQ. Im using a vocal-sample from a live-recording I did of a norwegian indie-rock band

The difference between the digital Avid and the analog UTA EQ is subtle.. not something that will make a substantial improvement in a live-concert situation. My conclusion so far is, that it should be possible to achieve much of the same results with a digital eq as with the analog UTA, but because of the great flexibility in the filter-types of the UTA, I may achieve good results quicker if I bring my UTA. And it never hurts with some smooth transformers in the signal-chain..

Hovewer, the EQ is only part of the story, the vocals really needs a compressor and a de-esser too. Not only to control the overall sound-level, but a good compressor can make the vocal-sound more consistent. Lets add our SPL compressor-box to the mix, and listen to the results! To really hear it working i gave the vocals 8-9 DB of compression:

Im pretty happy with the results! With the compressor the vocal sounds fuller without losing its sparkle. Now lets insert a digital compressor instead, I chose the compressor found in the default channel-strip in Pro Tools, as this should resemble the ones found in digital mixers. I used standard settings for attack, release and ratio, and gave it about 9 DB of compression

Ouch.. this sounds terrible! I really managed to destroy the vocals. The sound is inconsistent, pumping, the plosives are louder than before.. now its really obvious that the vocalist is popping the microphone! and the sparkle in the high frequencies is lost. Even when I try to optimize the attack and release-setting it doesn’t help much. Its impossible to achive the same results with the digital compressor as compared to the analog Dynamaxx.

The Dynamaxx just has two knobs, one for compression level and one for makeup-gain. Most of the behaviour is automatic: attack and release changes with the program-material, and the “compression level” both affects the treshold and the ratio. In use, the Dynamaxx is one of the fastest compressors Ive heard, the wave-files shows that it compresses a lot of the transients, but, unlikely many other compressors, the live-ness of the highend remains intact. It really shines on acoustic guitar, where short attack-settings  usually kills the string-sounds of the guitar and makes it become boomy.. but not so with this compressor. I cant explain why, but it probably has something to do with the auto-sensing attack/release that makes it behave different to the “body” of the sound as compared to the attack of the strings, in this way it reminds me slightly of a multiband compressor.

To conclude, I think these boxes will improve the sound of the lead-vocal, both because of the sound-quality in these boxes, and because they simplify my workflow. And, perhaps more importantly, it feels really cool to see some vu-meters moving and touch some real analog knobs in this digital era. I remember when I was 10 I was playing football with my brother, and despite it not being an official training, he asked me to wear proper football-clothes “because it will make you feel better and then you will play better”. I still believe in this placebo-effect.