mortenbrekke Posted on January 20, 2015 Posted in Uncategorized No Comments

Last year I worked 7 months for the Norwegian Music Academy NMH. Apart from lending out equipment to students, looking after projectors and wireless microphones, I also got to work on some interesting concerts with the promising music-students.
In an earlier blog-texts I wrote that musicians shouldn’t concern themselves too much with the audio-engineering because they should concentrate on the music. However, this fall I worked with some female students who implemented sound-engineering as a part of their musical expression, and I was impressed with how smoothly they did it. Perhaps musicians are better at multitasking than what I feared? They also prove that there is no reason that women should be less technical skilled than men, as Im sure their computer-programs are more complicated than the Soundcraft-console I used to mix them..
Both Hilde Marie Holsen and Live Sollid Schullerud had improvised solo-concerts where they sent their instrument through effects, “exploring the interaction between the trumpet and effects”, as Hilde explains on her soundcloud-page. She is a trumpet-player in the tradition of Arve Henriksen and Nils Petter Molvær, but perhaps she takes the electronic manipulation of the instrument further than her predecessors have done: sometimes the sounds she produces doesn’t resemble the trumpet at all. Her music is lyrical and ambient, slowly developing but never boring partly due to the unexpected sounds created by the electronics.
Live Sollid Schullerud does much of the same thing using her voice as source-material, creating music that might resembles that of voice-pioneer Maja Ratkje. The music is more influenced by the non-melodic noise-genre compared to the trumpet-player Hilde, but she is not afraid of using lush “nordic/ecm” musical soundscapes as well. 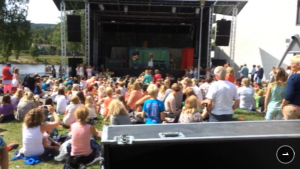 Speaking of talent, when Angelina Jordan visited Barnivalen in Kongsberg Jazzfestival, I saw that the 10 year old prodigy was no hype. With no time for soundcheck and an audience of 1500, she seemed to have the stage-authority of an old jazz-diva. Her singing-style was unique, she was free in phrasing and timing but she was never off target, like she was improvising the whole way. With the manager by my side at the mixing-desk I held the vocal fader tighter than I normally would do, but with Angelinas high-quality performance my job was easier than with other singers. 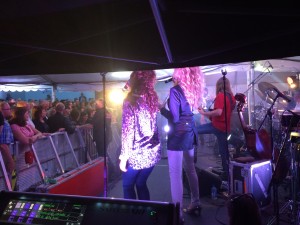 In Kongsberg I also got the chance to work with my childhood-heroes Dance with a Stranger. When I was a kid my father used to have a cassette of them in the car, and got accustomed to their smooth pop-rock style. Amazingly they are still going strong, and in Kongsberg they held a great concert in a sold-out venue. My job was to be in charge of the sound on the stage, making sure that the musicians heard themselves and each other.

For the sixth consecutive year I was documenting new compositions at the Ultima festival. This year I recorded some concerts in the Jacob Church, which proved to be a great hall for acoustic recordings.
I particularly enjoyed Ingrid Breie Nyhus piano-concert where the piano was processed through digital effects (again!) The music reminded me somewhat of free-improvised piano-music that I like, although the music was all composed.

One thing I like about working with contemporary music (compared to classical) is that there are not so much set rules about the sound, after all its hard to know how it should sound when the piece is never played before. In the composition “Shamisen” by Hikara Kiayama, he wanted the string-quartet in Ensemble Ernst to be amplified like a rock-band. He asked the sound-engineer to overdrive the inputs on his mixing-console to distort the sound. When I brought the recording back to the studio, I discovered that distorted sound doesn’t automatically mean dirty. I processed the strings quite hard through the Massey tapehead-effect, and instead of turning it into a guitar-amplifier, the sound became smoother and easier on the ears at louder listening-levels. The reason for this is simple: distortion adds overtones and frequencies which makes the instrument richer in timbre, meaning that there are less frequencies that stand out and hurt the ears. Just as pink noise is easier on the ears than sinus-tones, strings with the right distortion sounds more pleasant than raw strings when the music is amplified and played back louder than the natural acoustic sound. The violin was made to be an acoustic instrument played with the audience at a certain distance, so when you take the instrument out of its natural context, its not so strange that it helps to manipulate it a little bit.

In Riksscenen I work with a lot of folk-music, and as the genre is evolving its getting mixed with modern amplified music. Perhaps its a good idea to try a little distortion to smooth the strings out? I will definitily explore this further in 2015. Hopefully these experiments will be included in next years highlights;)